Get inspiration on productivity, design, and technology.
How to hack beautiful flourishes into your font 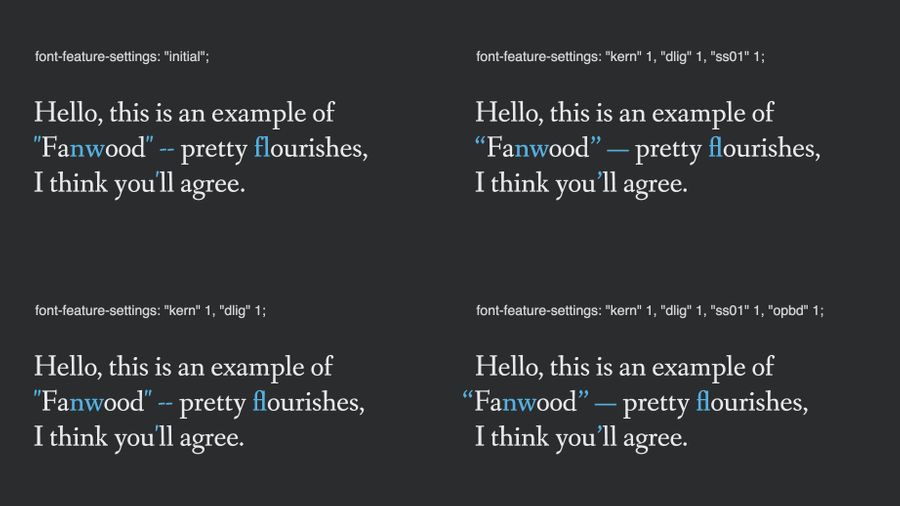 I've recently been doing some work on making Superhuman the most beautiful email experience in the world.

One of the features we want is automatic "smart quotes".

I'd known for a while that OpenType was capable of processing during font rendering. So I set myself the challenge of implementing smart quotes in the font file itself.

To cut a long-story short: it works, and it's easy to modify an existing font to support it!

NB: This is supported up-prefixed by Chrome 50, IE 9, Safari 9.1, and Firefox 34. Chrome enables "kern" by default, Safari enables both "kern" and "dlig" by default.

Your font-feature-settings property will be a list of quoted four-letter OpenType features, followed by a number for their value.

The most essential feature to enable is "kern", which enables proper kerning:

It's also nice to enable "liga" and "dlig" which control the use of ligatures:

Look at the following image. Notice how the ugly space between the nw of Fanwood is tightened, and how the messy fl is replaced by a ligature.

The second trick is to actually implement curly quotes.

Under the hood, each OpenType feature is a set of pattern matches. When a certain sequence of glyphs occurs, you can substitute in a new glyph, or change its position.

The OpenType Cookbook is a good reference for the syntax, which is supported by most font editing tools and processed by the ADFKO.

The patterns are very simple, yet you can use a few techniques to implement surprisingly complicated substitutions:

Exercise for the reader: I think this makes an OpenType font a finite-state machine, anyone fancy implementing arbitrary regexes?

Starting small, we can create a simple rule to replace exactly two hyphens (--) by an em-dash ( — ):

To implement smart-quotes we need to be able to tell if a quote is at the start of a line.

We can approximate this by defining the character class @All which contains all the glyphs in the font. We can then use @All to catch any quotes that happen after a character. Quotes that don't happen after any character are at the start of a line.

Because there was no pre-defined OpenType feature name for smart quotes, I added it to the font as "ss01" or Stylistic Set 1. This is the result:

Finally, inspired by Typeset, I wanted to see if I could also implement hanging punctuation. This gives the left-margin of a paragraph a strong vertical line by having punctuation marks hang to the left.

Once I had the substitution rules and the character classes set up for the smart quotes, this turned out to be simple:

The positioning rules move the left and right of the glyph independently. The number 421 comes from looking at the glyph for a curvy left quote and taking its width including some spacing. I only needed to look at the curly left-quote, because the "opbd" feature is defined after "ss01" and so all the plain quotes have already been replaced at this point.

This technique only works for punctuation on the left, but as most text on-screen is set with a ragged right margin, we don't need punctuation that hangs out to the right.

More work could be done — for example, Typeset moves "Y"s, "V"s and "W"s out a little too — but this serves as a proof of concept.

Implementing smart-quotes in your font is totally doable.

It's not as good as using the correct glyphs in the first place, but it's on-par with doing it in Javascript. And it's a lot more convenient: there's no code to run.

You can download my hacked version of Fanwood Text from GitHub, or preview it here.

I used Glyphs to open the existing Fanwood font and add new features. If you use a different app the UI may be slightly different, though I'm sure you can re-use the syntax.

That's all for now — please recommend and share if you enjoyed this. And don't forget to follow our publication for more updates!